Spain 2017 Christmas Lottery, the biggest in the world, now we have it here without commission !

Source of the image: Loterías y Apuestas del Estado
Try luck with our odds and, when you decide your dream number, look for the best endings in this one Official Lottery Administration of Spain (Click image)

2.38 billion euros are waiting for you!

* This year our software has evolved
The analyzes for the Christmas draw, have been designed in 3 groups very well defined
Each group gets optimized tenths*

Our odds for completion of the first prize are: 0.1 or 6 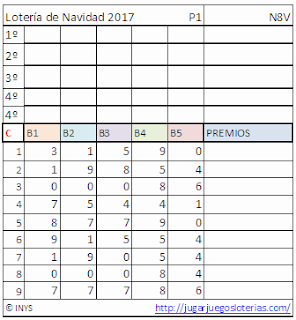 PUBLI2
It is based on the most probable numbers (Pro) of our systems (S2 to S3)
The selection of numbers is automatic,
Just like the APIS-aut of the euromillions 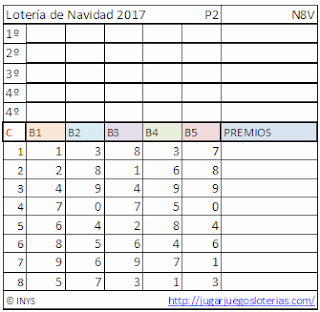 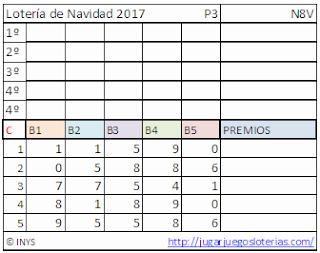 NUMBER DREAMED
We offer you the numbers of our 'witches' collaborators
The numbers you have seen in your dreams, with statistics from last year: 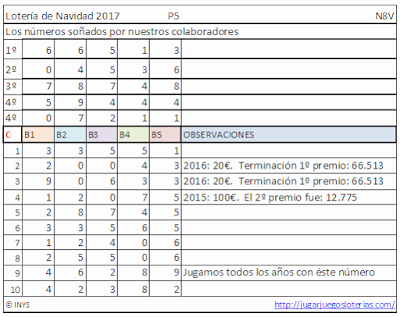 * It takes into account that the historical of draws filtered, for these analyzes,
NOT all the history, but the group of the NUMEROLOGICO, that this year is the 8

*Meaning of each column in the PUBLI*

If you live outside Spain or, if you do not find your favorite endings, you can find tenths available in the following platforms (click on the banner):

Official information about the draw:


The Extraordinary Christmas Draw of Spain, one of the most important in the world, has been celebrated since 1812, rather than the draw itself, because of its closeness to these festive dates and popular sentiment.

The lottery offers a € 2.38 trillion prize pool, the largest in the world

Attractive odds of winning that start at 1: 6.5 per prize

In total, they are expected to earn more than 26 million

This Extraordinary Christmas Draw, to be held on December 22 at the Teatro Real in Madrid, located in the Plaza de Isabel II, is the most important and popular of all our Lottery Sweepstakes.

In 1837 there were two first prizes of equal amount.

In 1938 two draws were held on 22 December, one in Barcelona and another in Burgos.

As a final number 5 was the number that was awarded the most times: 32 times, but never finished in 25. Followed by 4, with 27 times and 6 times, also with 27 appearances.

The final number less repeated was 1. They follow on 2 and 9.

** IMPORTANT: Before joining you must read the terms and conditions of the platform. By registering, you are automatically accepting the terms and conditions of the platforms we published in our blogs and websites. You should also read our Legal Notice regarding these platforms. ** REMEMBER: These platforms are exclusively for over 18 years. Gambling is fun when you play responsibly. Do not let it become a vice that can destroy you and your family. ** You come to visit the best online European lotteries **